Don't take a backpack to the Oktoberfest

If you do, security will not let you in, but direct you to an area where it will cost you  six euro to store your pack.
Posted by Randall Bytwerk at 5:47 AM No comments:

Email ThisBlogThis!Share to TwitterShare to FacebookShare to Pinterest
Labels: Germany

Hiring a Driver in Quito

There are many interesting things to do within an hour or two of Quito.  Some are reachable by public transportation. One can rent a car, which has its challenges.  Although driving outside of Quito is quite easy, the city itself can be a traffic disaster.  We hired a private driver for a day and were glad we did.

First, we contacted Metropolitan Touring, a throughly reliable company — but their prices were very high.  It would have been about $600 for the four of us.  We gasped.  Then we tried our hotel, the Hilton.  They offered a driver for the day for $180.  Much better.  I did some checking on the Internet and found a variety of recommendations for Victor Alban (vicalban@hotmail.com). His English is quite good.  His rate for the day was $140. We tried to get him.

Unfortunately, he was booked for the day, but he suggested an associate, Ruben.  Ruben has limited English, but we corresponded with Victor Alban in advance and worked out an itinerary.  Things didn’t go quite as planned, given rather heavy traffic and the fact that one of our destinations was harder to get to then we expected, but Ruben was adaptable and we did everything we wanted to do.

Altogether, we were happy and definitely recommend Victor Alban if you need a driver in Quito.  You might try to plan ahead more than the two days we did...
Posted by Randall Bytwerk at 6:46 PM No comments:

Be at least cautious about using “Ships Information” if you are cruising in Fiji. 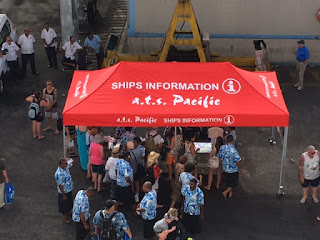 They set up business where cruise ships dock.  They are reliable enough — but charge a commission.  I rented a car through them in Fiji, then walked 100 feet to the Avis office to get the car.  I would have saved money by going directly to Avis.

I think they are dependable enough — but you should check around the area before using them.
Posted by Randall Bytwerk at 5:50 PM No comments: